One of the Most Advanced LED Grow Lights with Incredible Efficiency!

SANlight are an Austrian company with a fantastic reputation and knowledge of semiconductor technology and photonics. The Osram LEDs in this unit are very efficient with an output of 2.7µmol / Joule. This makes the SANlight Q6W Gen2 one of the most efficient LED grow lights on the market. The SANlight Q6W features a full spectrum but with a large amount of red for tremendous productivity. The unit is highly reliable thanks to its passive cooling through large heatsinks which means there are no fans to fail. The excellent secondary optics create a very even footprint.

Want to read more about the SANlight Q6W? Take a look at our blog here.

Changes from the Gen 1 to the Gen 2 SANlight Q6W

How the SANlight Q6W Gen 2 Works

SANlight have spared no expense in creating the Q6W. It boasts probably the most efficient LEDs in any grow light anywhere. Electrical energy is measured in Joules and 1 watt is basically where 1 Joule of electricity is used per second. The LEDs used in the Sanlight Q6W Gen 2 produce 2.7µmols / Joule.  Most LED grow lights produce around 2 µmols of PAR light per Joule of electricity but the efficiency of the LEDs in the SANlight Q6W Gen 2 mean that this unit produces a whopping 2.54 µmols of PAR (Photosynthetically Active Radiation) light per Joule of electrical energy which makes it around 35% more efficient. This makes it amongst the most efficient LED grow lights available anywhere. The unit has a power factor of greater than 0.95 which means the electrical power supply wastes as little as possible.

The light output is full spectrum but with the addition of lots of extra red. The red part of the light spectrum is the most productive of all the colours. The combination of amazing efficiency and lots of red light means that the SANlight Q6W Gen 2produces a greater yield per watt of electricity than virtually any other LED grow light. At 215 watts it produces as much light as 280 watts of electricity used by many other LED grow lights.

Here is a quick review of our test of the SANlight Q6W: 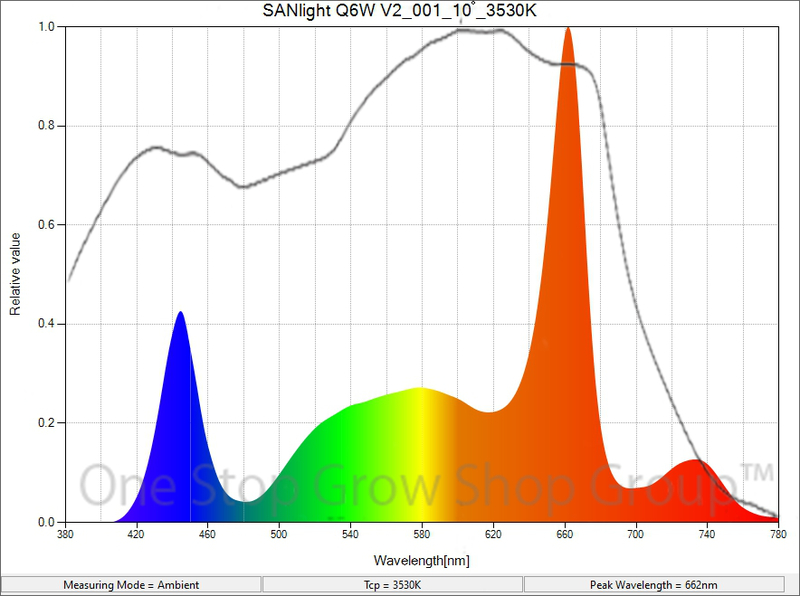 The grey line in the chart above is the McCree curve which represents how much relative photosynthesis is produced across the spectrum.

The SANlight Q6W uses specially designed secondary optics to create an exceptionally flat footprint. This means that your garden will be productive right the way out to the edges. Here is the lighting footprint over a 1.2m x 1.2m area at a hanging height of 45cm: 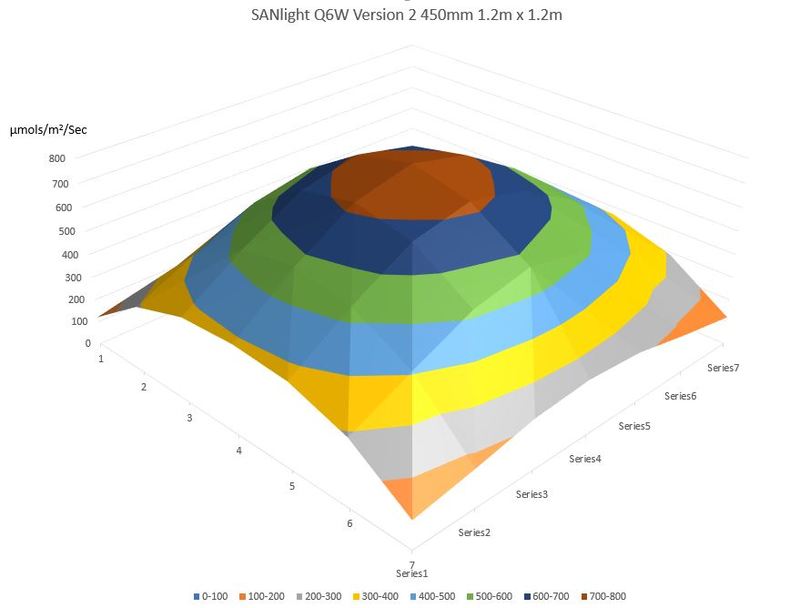 How to use the SANlight Q6W Gen 2

The SANlight Q6W Gen 2 works great in a 1m x 1m square tent. It features 3 eyelets at each end for hanging from. Use the centre eyelets to hang the unit horizontally flat. To hang the unit with a slight slant use the eyelets on either side. This may be useful at the end of a run in a garden where several lights are used in an overlapping arrangement.

For mature plants, SANlight recommend that the unit is hung at no lower than 35cm. This is about right for a 0.8m square tent. However, for a slightly larger tent such as a 1m square tent then the coverage will be better if it hung at around 40-45cm. If the unit is used over young plants, then this height also should be increased.