We offer a full range of grow lights from budget 600w kits to the latest in LED technology, from prices as low as £49.95 you can get growing easily. One Stop also offer a huge range of grow lamps and reflectors alongside timing gear and other accessories. For successful growing of plants indoors, it is essential that they have adequate light from a growing lamp or bulb. Even the productivity in sunny glass greenhouses can benefit from supplemental grow lights, particularly to boost the illumination in the dimmer and darker corners. Cloudy days can be dull and gloomy and during those times your plant growth will be limited by the amount of bright, quality light that your plants are getting. If you use a grow tent then to get the biggest, highest quality crops you'll need to make sure that your plant grow light is penetrating through the canopy and providing plenty of light to every square inch of grow space. There's several of options for additional lighting, from fluorescent CFLs through to the brand new range of Spectron LED Booster grow lights. Free delivery on all orders over £25.

Want to know more about different types of grow light? Read below at the bottom of the page, or read this for an even more in-depth description. 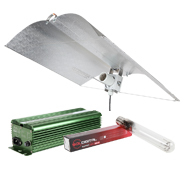 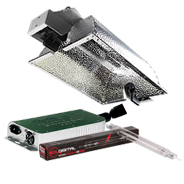 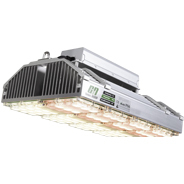 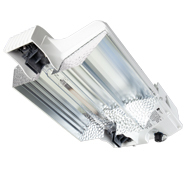 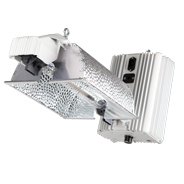 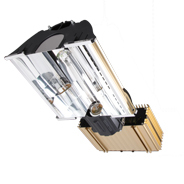 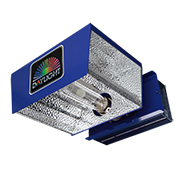 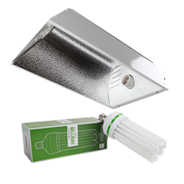 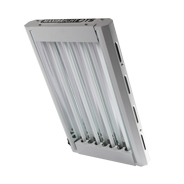 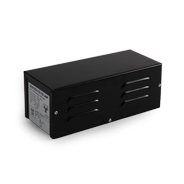 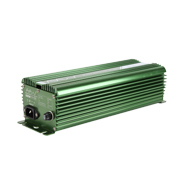 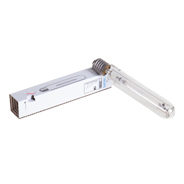 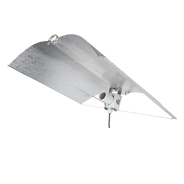 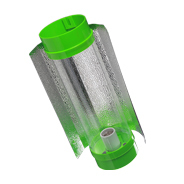 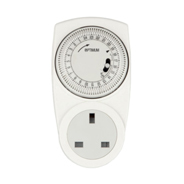 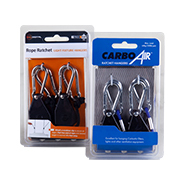 There's are different types of grow lights.Quite simply, plants need light to grow. The job of a grow light is to provide the correct kind of light.

Here's a run down about the different types of grow light:

This is a type of HID grow light and used to be the standard type of light for flowering and fruiting. They consist of a lamp, ballast and reflector. They work by exciting a sodium gas inside an element (arc-tube) inside the lamp. The light they emit has an orange-red colour to it which is great for producing big yields. A 600 watt model generally covers an area of 1.2m x 1.2m while a 1000 watt model is better suited to a 1.5m x 1.5m area. There's quite a few different models of reflector. The better the reflector, the more light it will reflect back down onto the garden, and the more evenly it will light the canopy. There's a choice of cheaper magnetic ballasts or more efficient (and cooler) digital ballasts which usually boast a dimmer and boost facility. HPS lamps go from very cheap to very expensive. The key to them is that you get what you pay for. The better lamps produce more light and have a slightly broader spectrum. The high frequency 400 volt HPS lights, such as by Dimlux and Gavita, are the very best types of HPS and provide a step up from the standard types in terms of efficiency (light output per watt) and spectrum. The downsides to HPS is that they run very hot (the lamps run at several hundred degrees Centigrade ,ºC) and they produce infra-red. The result is that the grow space can become hotter than the ideal temperature for growing plants. HPS is also less efficient (produces less light per Joule of electricity) than the recent crop of premium LEDs.

This type of plant grow light has progressed a huge amount in recent years. Early models were quite inefficient and the spectrum they emitted was a mixture of red and blue (blurple). Thanks to huge advances in LED component technology and a better understanding of what parts of the light spectrum that plants really need, they have overtaken HPS for yields per watt of electricity, and crop quality has gone up considerably. The best LED grow lights are built using white LEDs and, usually, a few extra red ones. There's plenty of blue in the spectrum which keeps plants short and stimulates essential oil and resin production. The cyan, green and yellow also assist with final quality, plant structure and health. The extra red makes these lights produce the goods. They run cooler than HPS too. Although they require a bigger initial outlay, they pay for themselves due to reduced power requirements and their lifespan of at least 5 years (with no lamps to change out during that time).

Fluorescent lights are usually the tube type or the CFL (Compact Fluorescent Light) type which look like a large version of household lamps. Although they might look like they produce white light, the spectrum they produce is rather uneven, and they relatively inefficient. They tend not to penetrate the canopy very far so they are not very good for lighting young plants but they are good for raising cuttings and seedlings that prefer a gentle, diffuse light. They run a little warm but usually not so much that it creates problems.

CDM (Ceramic Discharge Metal-Halide), sometimes called CMH (Ceramic Metal Halide) are the modern version of the old HID MH type of light which is less popular these days. CDMs produce full spectrum light and produce high quality crops. Like HPS, they use an element (arc-tube) filled with a gas that is excited by the power provided by a balllast. They are often used alongside HPS to fill in the spectrum where HPS lacks. They are still HID lights, though, and because of this they do produce quite a lot of heat. Many growers use one 315w light between 2 600w HPS lights. Many growers swear by them. Remember that CDM lamps do not have an E40 connection like HPS or MH lamps. Instead they have a bayonet fitting which means that you need to get a reflector with the correct fitting, or use a converter.

These are like the old version of CDM HID lights. The element in an arc-tube is filled with a metal halide gas. A ballast, lamp and reflector is required just like HPS. They produce a blueish white light that makes them great for vegging plants under. Unfortunately, they aren't very efficient and they produce a lot of heat (even more than a similar wattage HPS).