Close
The store will not work correctly in the case when cookies are disabled.
Menu
Account
Settings
Language
Default Store View

Telos Mesh units are the new and improved replacements for the Telos 0010 Pro and Telos 0006 Pro.

GN Telos LED Grow Lights are the culmination of many years of research and development. The team at Grow Northern are electrical engineers with decades of experience in the horticultural industry, and they set out to find out what works and what doesn't work when raising plants with LED grow lighting.

These LED grow lights represent the future of indoor horticulture, and they will not disappoint even the most demanding grower. That's because Telos LEDs produce yields that will blow the equivalent wattage for HPS lights out of the water. They also emit less heat and offer unbeatable reliability.

Late 2021 saw the introduction of Telos Mesh, a leading edge, future proof bluetooth integrated upgrade with an ultra-secure, encrypted wireless network. This new system has many benefits and is much more efficient, replacing traditional timers and contactors by allowing you to create one or more networks of Telos systems, each with its own lighting schedule / timings. These units talk to each other via bluetooth connection, keeping them synchronised and acting as a group. You can then control the timings of the group using an app on your smartphone. The system gives you access to extra features like sunrise / sunset, which eases lighting in and out gradually, and it also allows you to regulate light intensity.

Many growers developed a scepticism about LED grow lights after getting their fingers burnt with early models that simply didn't deliver as promised, when the technology was till in its early stages of development.

Telos grow lights were part of the first generation of LEDs to perform as stated (and then some!), showcasing the technology that represents the future of the industry. They were some of the first units to generate exceptional customer feedback. Once growers experienced the benefits of a Telos LED, they came back to buy more in droves.

Telos units produce rich, full spectrum light that recreates optimal outdoor conditions by mimicking natural sunlight. While some "full spectrum" LED grow lights employ just white LEDs, others utilise a mixture of blue and red LEDs. Grow Northern chose a spectrum that optimises plant growth during both veg and bloom - mostly white light with a generous helping of extra red. This combination gives growers enough blue light to keep internodes nice and tight early on while piling on weight during the later stages. The lenses used give Telos systems a wider coverage, allowing them to cover larger percentages of the grow area at the same height as other LEDs.

The research and development team at Grow Northern have engineered the GN Telos to be practically indestructible - you could probably throw one of these units down the stairs and it would still work (though we don't recommend trying it!). You'll be shocked at the sheer quality given the relatively low price.

To further increase reliability, the 3 watt rated diodes are slightly under-driven. Initially, that might sound surprising; however, there are actually very good reasons for doing this. It does mean that slightly more diodes needed for the same wattage, which makes the GN Telos slightly larger in size, but it has the effect of making the diodes run more efficiently while extending their lifespan. To maintain the theme of reliability, Telos units are powered by the superb Meanwell driver units which are among the best in the industry. As a consequence of their efficiency, Telos units generate far less heat than HID lighting, making the grow room environment much easier to control. This helps to create a crop that's not just more abundant, but also of better quality. You can expect more intense flavours and aromas from fruits produced with this LED grow light, and a better looking end-product with richer, more varied colours.

With an 85000 hour lifespan, these LED Grow Lights will illuminate and adequately cover your growing area for nearly ten years of continuous operation.

Check out our complete Telos grow tent kits, which include tent and extraction, giving you an even better price and saving you £££s. Choose between the following versions: 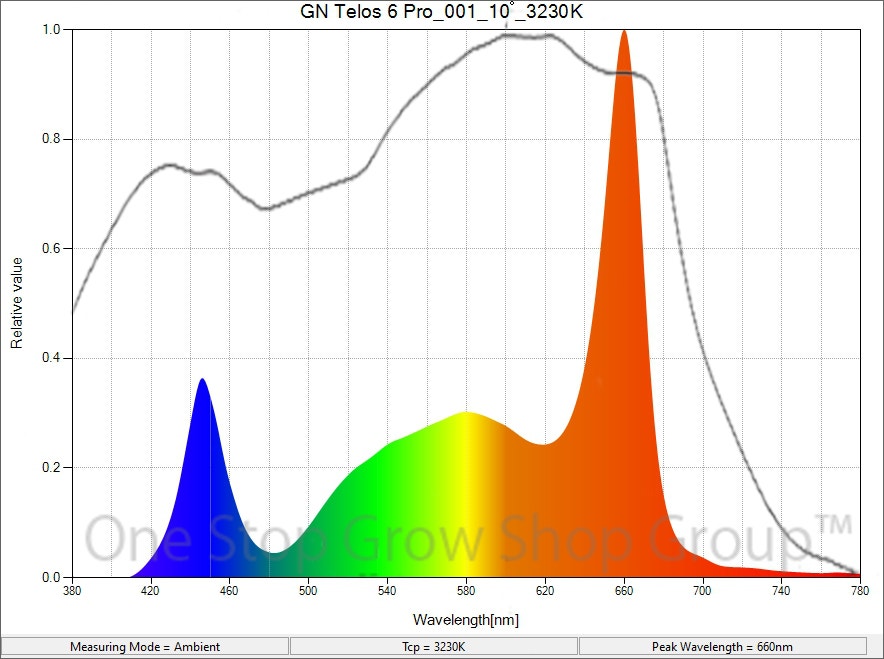 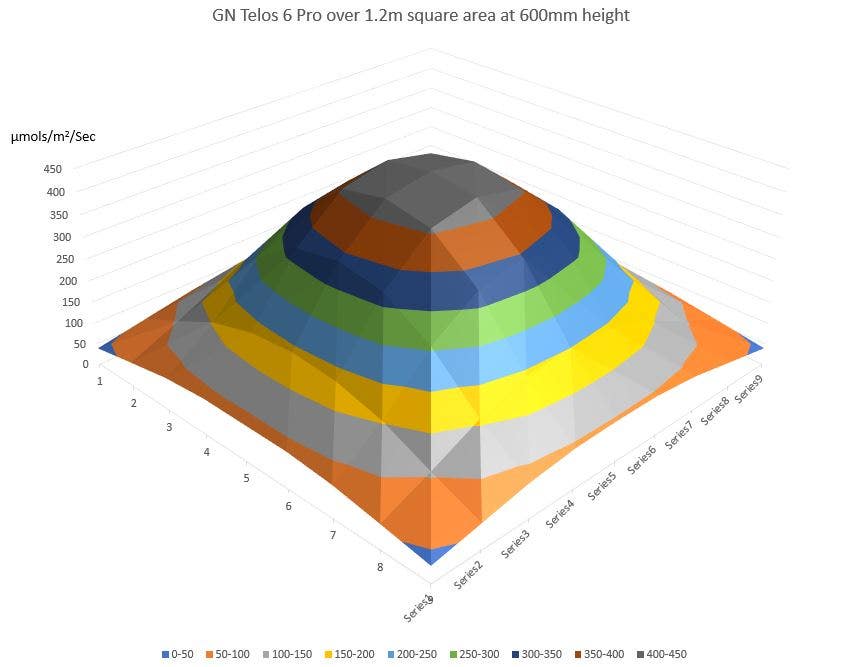 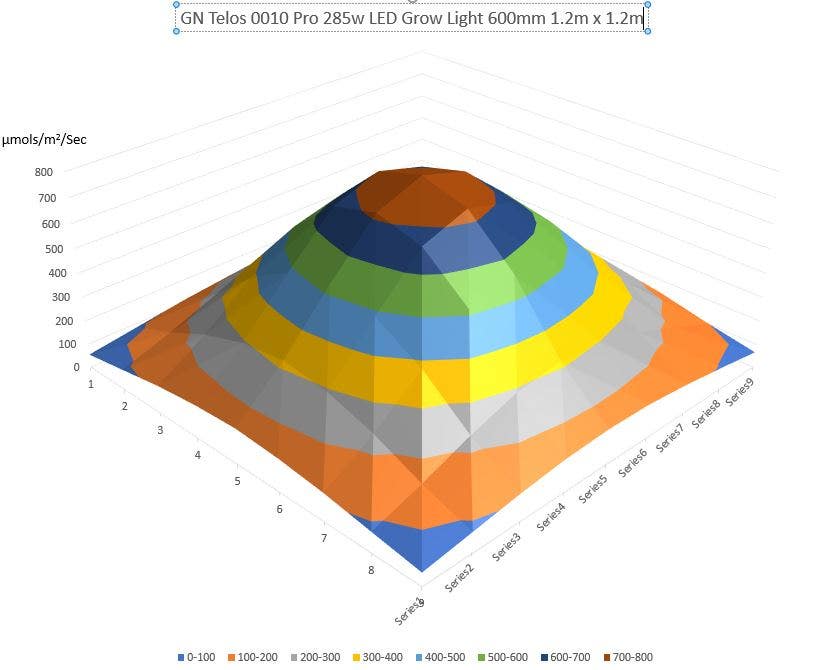 How to Use GN Telos Pro Mesh LEDs

To get the most out of your GN Telos, it is best used in a grow space or grow tent of between:

For auto flowering varieties of plants such as tomatoes, chillies, peppers etc. the grow areas for your Telos LED can be slightly increased.

The GN Telos grow lights include a hanging kit with strong metal eyelets at each end for easy, secure hanging. We recommend that you use the wire cable and carabiners included with the unit. Alternatively, a pair of sturdy Rope Ratchet Hangers or Jack Chain could be used to hang your Telos LED. Due to the weight of these items they are unsuitable to be hung via easy rolls.

For cuttings, seedlings and young plants, we recommend a hanging height of 1 metre above the canopy.

For larger, well-established vegging plants, we recommend a hanging the Telos 80cm above the canopy.

For plants in the flowering stage, we recommend a hanging height of 60cm above the canopy.

LED grow lights produce less heat, so factor this in when dealing with your environment during the winter.

Write Your Own Review