Please note: The Maxspect R420R (Razor) 180W 15K LED Grow Light is designed for horticultural use only and NOT aquariums for fish/coral.

The Maxspect R420R (often called the Razor) is a 180 watt grow light using the famous Cree range of LEDs (XT-E and XP-E). The LEDs are arranged in four modules along its length and the advanced Mitsubishi optics give a wide 120° beam angle. The reflector behind the LEDs use advanced Nano-Blend Technology to make sure every photon is used to its greatest effect. The LEDs in the Maxspect Razor are in 2 groups or "banks". One group mainly has blue output and the other has mainly red output. Each bank can be dimmed from between 0% and 100% in 1% increments giving the user complete control over the output spectrum. The razor is a very efficient alternative to using fluorescent lighting for raising cuttings and for the vegetative stages.

Light Spectrum Output Graph with both Red and Blue set to Maximum: 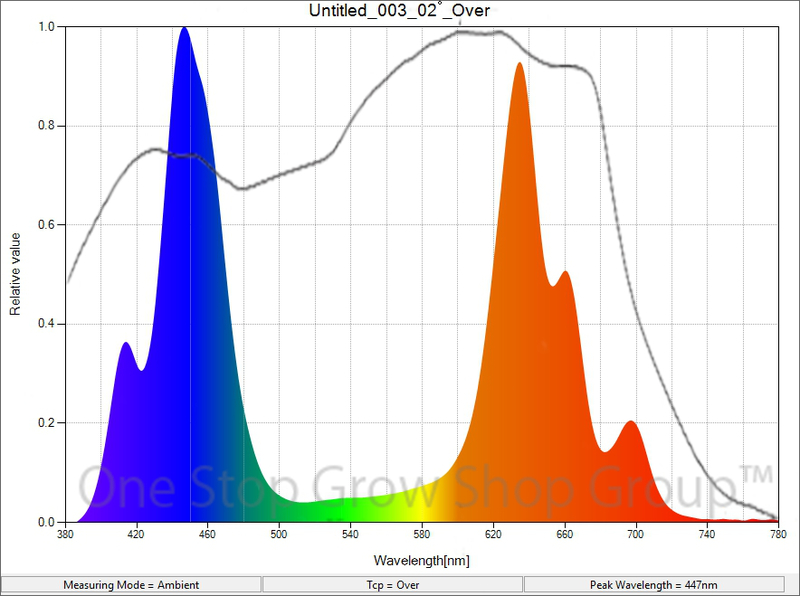 How to use the Maxspect Razor LED Grow Light

Before hanging the Razor grow light in your grow space you will nee to fit the two cable loops - one at each end of the unit. The ends of the loops simply screw into the threaded posts provided on the unit. The wire loops then provide a method of hanging the unit in the centre of the grow space.

The drive unit should be placed on a flat, firm surface (not carpet). The outlet cable should then be plugged into the inlet tail on the unit. A notch in the plug and the socket need to be lined up to do this. Once the plug and socket are together, the locking collar can be screwed to prevent them accidentally coming apart.

Plug the IEC lead into the drive unit and the other end should be plugged into a mains outlet socket. The switch on the drive unit can now be turned on. The unit will then illuminate.

At the opposite end of the Razor with the power input tail there is a display with the current percentage outputs for each of the two colours, and also a control knob. This is used to changed the brightness settings for the blue and also the red colour outputs by turning it. The current setting that is being changed is highlighted on the display. The setting to be changed is rotated through by pressing in the control knob until it clicks. In most circumstances, the best results will be achieved with both banks set to 100%.