We're going above and beyond to make sure you are getting the best product available on the web for the best possible price on the Heliospectra LX601C:

*As the next step in grow lighting the Heliospectra LX601C is constantly being tested and updated to make sure you have the best LED grow light available. Heliospectra will produce regular updates to the firmware to improve functionality so that these superb LED grow lights will always be ahead of the curve.

**please note this takes an additional 24 hours on top of quoted delivery time.

Heliospectra have taken the Hydroponics LED grow light market by storm with the LX601C which features technology not found on any other grow light in the world. The advancements easily make it the most exciting and advanced LED grow light you can buy. The Heliospectra LX601C gives the user the unique ability to control it's spectrum output via software running on a laptop,  tablet or mobile. The Heliospectra LX601C features 4 Colours of LED, all with amazingly intense output. There are blue and red LEDs whose output colours exactly match the ones that a plant's chlorophyll uses for photosynthesis. Also included are white output LEDs which produce light that can greatly increase plant health and disease resistance.

Finally, the Heliospectra LX601C has LEDs which produce light in the far red (almost infra-red) part of the light spectrum. This allows the grower to simulate the extra far red that a plant sees at sunrise and (most importantly) during sunset in nature. Far red light can induce a much stronger flowering response and therefore optimise yields. For most plants, far red light is not needed until after the first 2 weeks of the change in lighting schedule. If it is used in veg or the first 2 weeks then it can increase internodal spacing (stretch) and so including far red at these stages is generally not recommended. Far red light from the Heliospectra LX601C at the middle or end of the flowering/fruiting cycle can also increase terpine and essential oil production in a plant, leading to a higher quality end product.

The output of the 4 types of LED in the Heliospectra LX601C can be individually controlled via a software program. This needs to be initially set up via a lan cable connected to your router. Once the initial set up has been done, the Heliospectra LX601C LED grow light can be connected directly to a wireless router or access point. A mobile phone or tablet, for example, can then be used to control the unit. The software allows you to control each colour in 1000 steps. You can even program the unit to adjust the level of each the colours for you on it's own, according to the hour, minute and second on a daily schedule.

Heliospectra have developed an incredibly impressive lens. We have tested the spread of light from the LX601C at Heliospectra's recommended height of half a metre (50cm / 500mm / 20 inches) using a Li-Cor Quantum Light Meter which measures PAR (Photosynthetic Active Radiation) or PPFD (Photosynthetic Photon Flux Density) in umol/m2/s (micromoles per metre squared per second). The graph below shows the coverage over a 1.2m x 1.2m unenclosed (open) area: 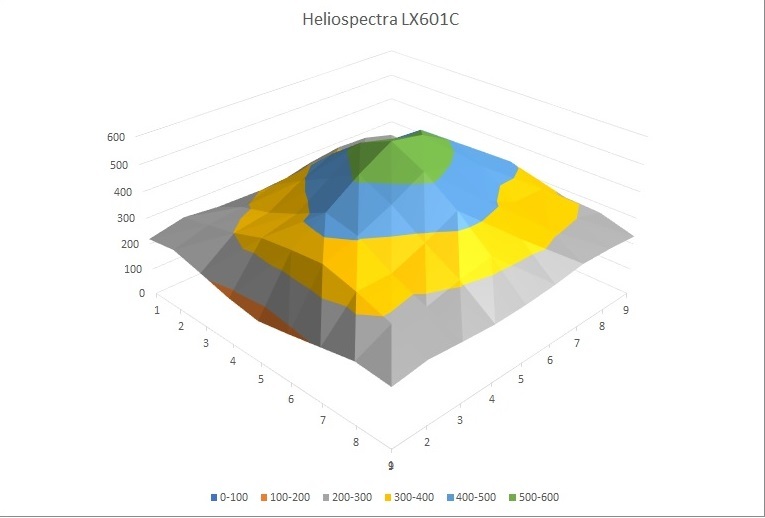 For comparison here is the coverage from a very high-end 600W HPS grow light in the same test area at the same height This grow light was previously our favourite 600 watt grow light. It is worth bearing in mind that plants do not use light intensities over 600 umol/m2/s effectively. This means that the peak in the centre will not respond proportionally to the extra light over 600 umol/m2/s directly below the lamp. The steep drop off at the edges (compared to the Heliospectra LX601C) means that yields at the sides of the 1.2m x 1.2m area will not be as good: 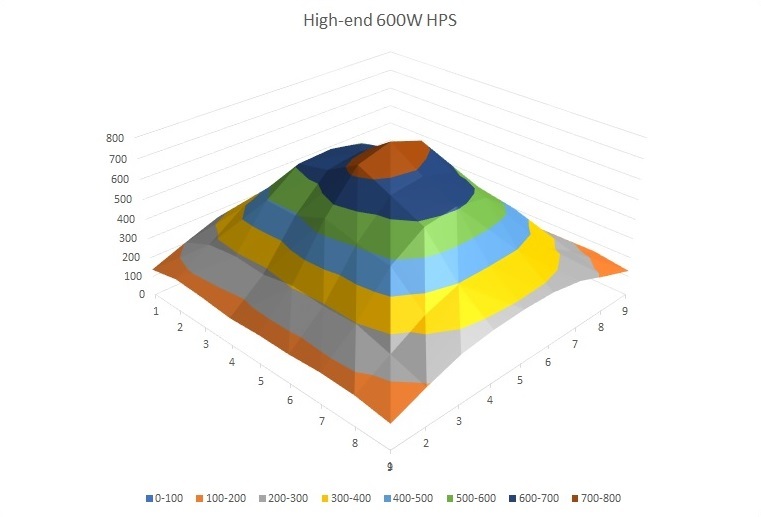 Now, let's have a look at the output spectrum: 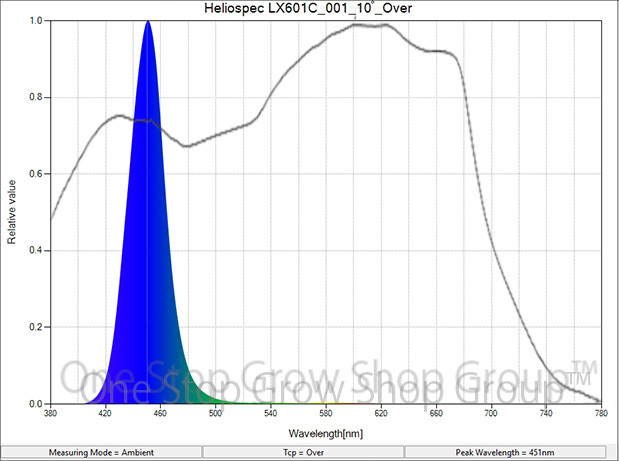 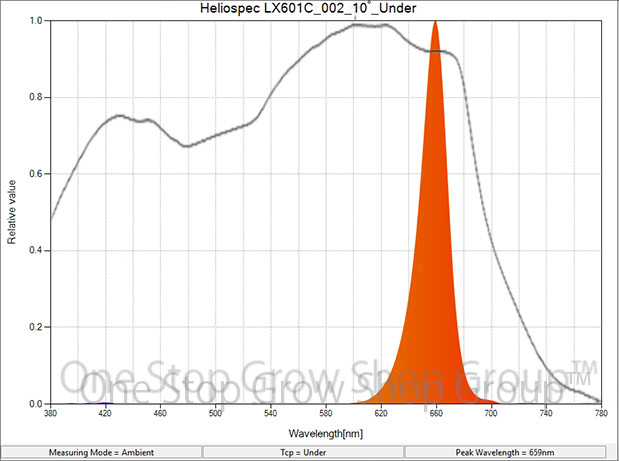 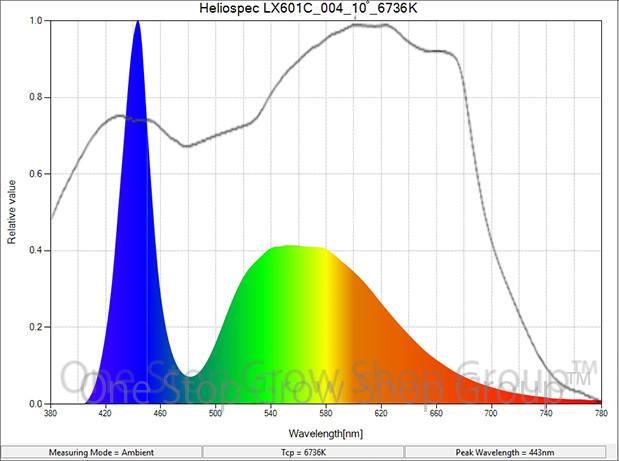 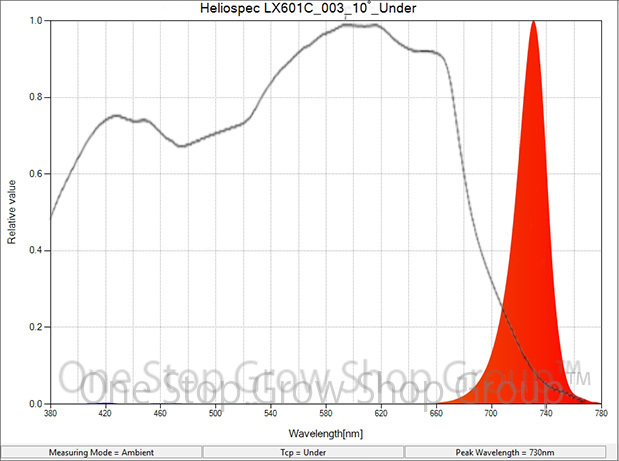 All LEDs On Full: 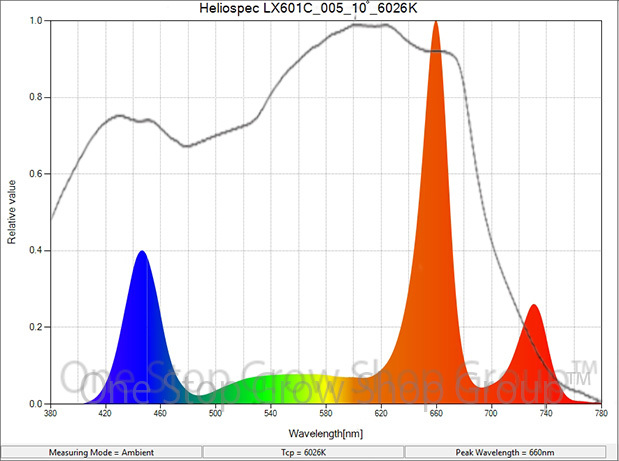 The black lines in the graphs above represents the "McCree Curve", which gives a relative indication of how efficiently a plant uses the different colours in the light spectrum to photosynthesise with.

For more information about the above graph check out our blog

How the Heliospectra LX601C Works:

Plants use different parts of the light spectrum for different reasons. Blue and red light are used for making sugars which are required for growth. Blue is most effective for vegging and red is most effective for flowering/fruiting, but it is best to have some of each at both stages. The Heliospectra LX601C can produce lots of both! Some of the wavelengths in-between blue and red light are used for making other compounds (such as carotinoids) which are necessary for good plant structure and health as well as good pest and disease resistance. While a great grow light will be able to provide all the colours in the light spectrum, plant growth can be optimised by being able to provide more of certain colours depending on the stage of growth that it is in. The Heliospectra LX601C allows the grower to control the spectrum as they like. As mentioned before, blue light centered around the 450nm wavelength is best for vegetative growth and keeping internodes short. However, during flowering, the plant will be most productive with a bias towards the red part of the light spectrum centered around the 660nm wavelengths. We would recommend including at least some blue in flowering and some red in veg (and plenty of white) for the best health and growth speed in your plants. One Stop Grow Shop can supply an optimised light schedule for the Heliospectra LX601C LED Grow Light upon request

Most plant growth is fuelled by sugars that are made by chlorophyll in the plant's leaves when it receives the correct wavelength of light. The peak chlorophyll absorption of light happens at 2 different wavelengths - at around 450 nanometres and also at around 660 nanometers. The blue and red LEDs in the Heliospectra LX601C produce light at these exact wavelengths. This makes sure that the electricity that you use to power your grow light is used most effectively to create the light to power plant growth.

Of course, plants also need to produce other compounds for health, disease resistance and to assist photosynthesis. For this reason they need some light from many parts of the light spectrum. The Heliospectra LX601C includes white LEDs to provide the light for healthy, disease resistant and productive plants.

The Heliospectra LX601C includes LEDs which produce light in the far red part of the spectrum (735 nanometres). Far red light (particularly at the end of the lights-on period) increases a plant's flowering/fruiting response. However, it can increase internodal stretch in veg and the first 2 weeks after the change in the photoperiod. For this reason it is not recommended at that point in a plant's growth stage.  However, during the flowering/fruiting far red light can help stimulate the plant into creating as many flowers/fruits as it can and increase terpine and essential oil production. It can also help ripen flowers and fruits.

The Heliospectra LX601C is fully programmable. The level of output from the 4 types of LED can be set to adjust according to the grower's requirements automatically at whatever time the grower wishes.

For growers with multi-light installations, the Heliospectra LX601C units can be operated together or in clusters when they are fed from a shared router for each cluster. Set up is achieved initially by direct connection to your network router. Use a computer connected to the same network and download and install the control software that can be obtained from Heliospectra's website. After network discovery, the Heliospectra LX601C grow light could then be connected to a wireless router (a cheap and cheerful one should be adequate do the trick!) to give the grower control by a wireless device such as a mobile phone or tablet. For multi-light installations, several units can be connected into a switch first before connecting that to the wireless router.

The Heliospectra LX601C controls it's own in-built variable fan to keep itself within operating parameters. It has an IP54 ingress protection rating for all the internal electronics, and IP24 rating for the cooling tunnel. The case is made of powder coated zinc treated steel and durable ABS plastic.

How to Use the Heliospectra LX601C LED Grow Light:

Simply hang the Heliospectra LX601C LED grow light in the centre of your grow space, preferably using a robust and adjustable product such as rope ratchet hangers. Heliospectra advise a height of about half a metre above the tops of your plants. Initially it may be advisable to start somewhat higher and lower it to half a metre over the course of a few days to gradually acclimatise your plants to the intensity. Connect the power lead into the mains and switch on.

Connect a LAN cable between the light and your network router. Using a device which is connected to the same network, Download and install the control software from the heliospectra website. After network dicovery, you will then have the IP address of the unit(s). If you wish, the Heliospectra LX601C can be connected into a wireless router or access point. A device such as a mobile phone or tablet (with the control software installed) can then be used to control the LED Grow Light.

Although the Heliospectra LX601C contains it's own wireless access card, we would advise caution about enabling it at the moment as the grow light might then be visible to others within the wireless range.