The Telos 6 Pro & 10 Pros are quite simply awesome LED grow lights for an equally impressive price!

The design of the Grow Northern Telos LED Grow Lights are the culmination of many years of plant science research, experience and electrical expertise to find out what works and what doesn't work when raising plants with LED grow lighting. The Grow Northern GN Telos LED Grow Lights feature a highly robust design and have the potential to produce fantastic crops from their modest power draw. This is due to their incredible efficiency at converting electrical power into PAR light (2+ µmols per watt). Featuring sealed LED units, which are passively cooled, high powered Cree LEDs and superb full spectrum illumination, these LED grow lights will not disappoint even the most demanding grower. With yields easily equivalent to similar or greater wattage HPS, the Grow Northern GN Telos LED Grow Lights produce less heat and offer unbeatable reliability to raise and grow healthy plants from start to finish.

The new Telos 6 and 10 Pro gives you an upgraded output (2.5 umols per watt), new high performance Osram LEDs, higher energy savings with it's cooler operating temperature (up to 10 degrees less than the previous model) and a slick rebrand.

Check out our complete Telos grow tent kits, which include tent and extraction, saving you £££s. Choose between the following versions:

It's no surprise that in the past growers became very wary of the claims made by LED Grow Light manufacturers. However, the Grow Northern Telos LED grow lights make no ridiculous claims. They are quite simply elegant, well thought out, high quality LED grow lights that produce harvests similar or greater in size to equivalent wattage HPS grow lights. However, they generate far less heat and create a finer end product due to their amazing spectral output. The Grow Northern GN Telos LED Grow Lights boast far greater long-term reliability and far lower maintenance costs as the Grow Northern GN Telos LED Grow Light will illuminate your growing area for nearly ten years of continuous operation.

The design centres around industry-leading Cree LEDs. While some "full spectrum" LED grow lights employ just white LEDs, others utilise a mixture of Blue and Red LEDs. Daniel Edwards deduced that the most effective spectrum for plant growth and bloom is mostly white light with a generous helping of extra red. This combination maximises growth whilst maintaining great plant health and structure. The Telos 0010 Pro has different proportion of LED colours. The 0010 Pro has 60% White LEDs and 40% Red LEDs. This gives it a different overall spectrum. 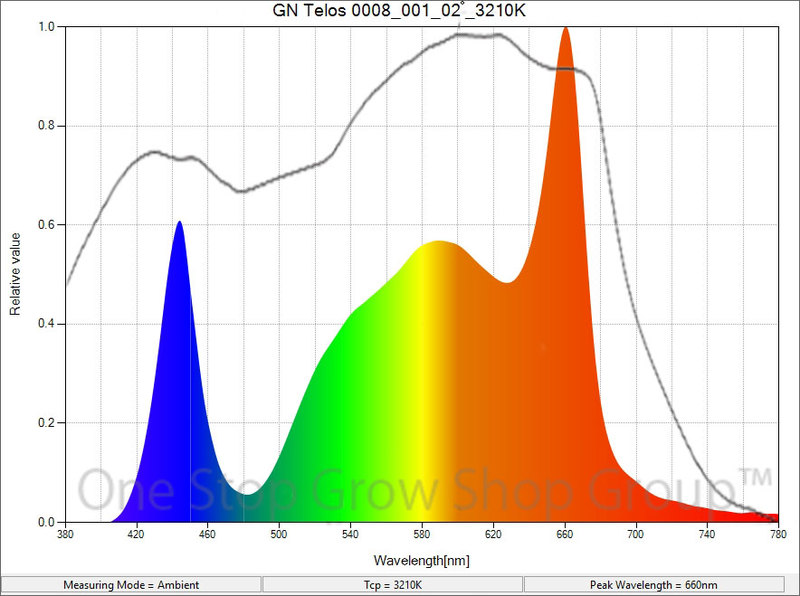 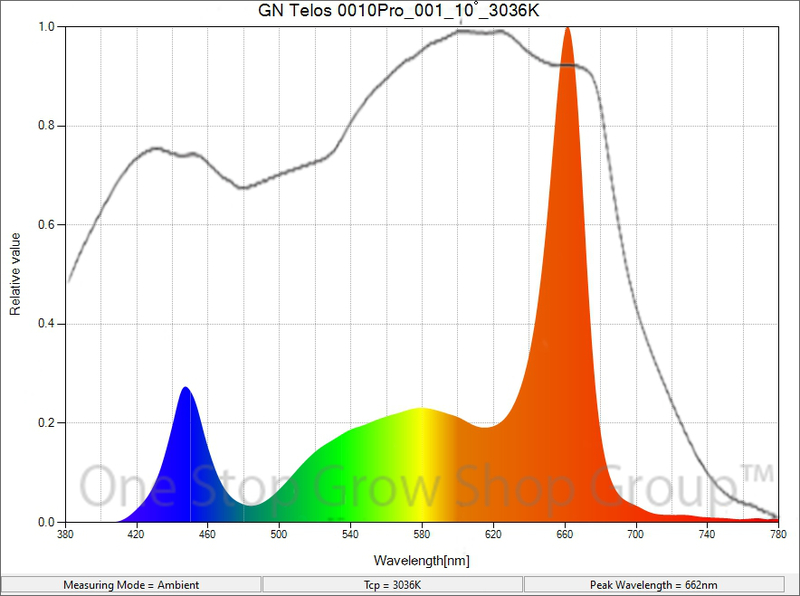 The LEDs are arranged into clusters containing 12 LEDs each, half of these clusters contain just white LEDs while the other half contain a 50/50 mix of white and red LEDs. The clusters are mounted onto an efficient heatsink which is large enough to cool the LEDs passively without the need for noisy fans that can burn out with extended use.

To further increase reliability, each of the 3W rated LEDs are slightly under-driven. Initially, that might sound surprising. However, there are actually very good reasons for doing this. It does mean that slightly more LEDs need to be used for the same amount of wattage and this makes the GN Telos's slightly larger, but the fact that the LEDs are not being driven at full power means that each one is actually slightly more efficient and also that their lifespan is extended. To maintain the theme of reliability, Telos units are powered by the superb Meanwell Power Drive units which are among the best in the industry.

The LED optics utilise cutting edge holographic technology for superbly even light distribution and intensity. Here are the lighting footprint for the 3 GN Telos versions all over an area of 1.2m2 at a height of 600mm: 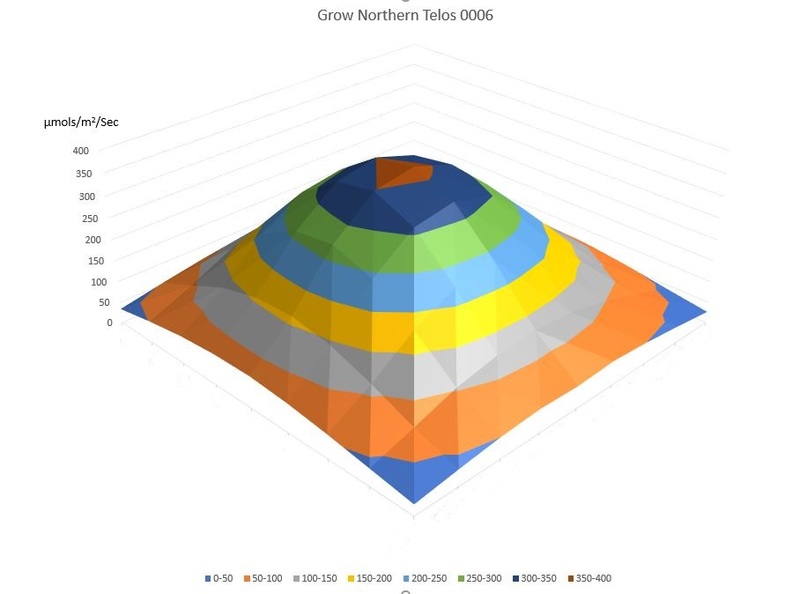 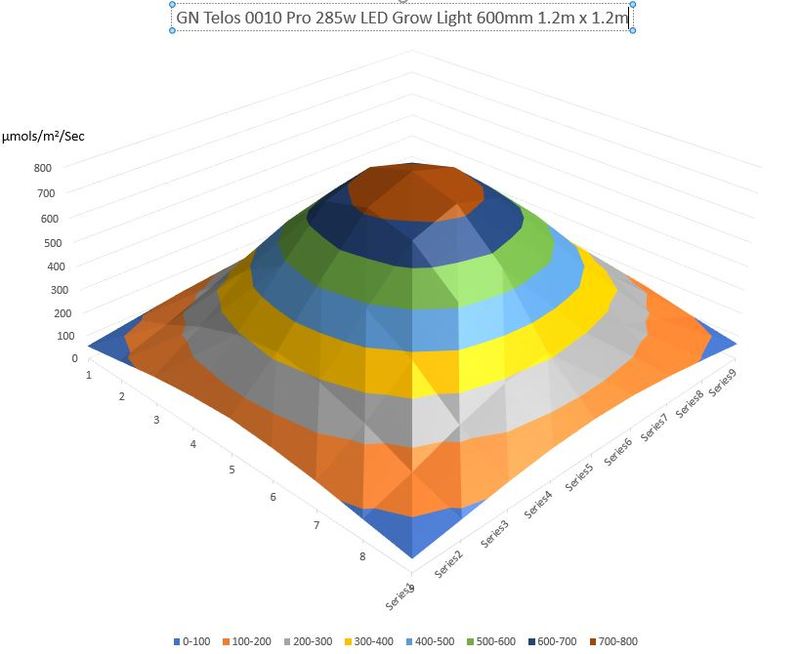 How to use the Grow Northern GN Telos LED Grow Lights

To get the most out of your GN Telos Grow Light, it is best used in a grow space or grow tent of between:

For auto flowering varieties of plants such as tomatoes, chillies, peppers etc. the grow areas suggested above can be slightly increased

The GN Telos grow lights include a hanging kit with strong metal eyelets at each end for easy, secure hanging. We recommend that you use the wire cable and carabiners included with the unit. Alternatively, a pair of sturdy Rope Ratchet Hangers or Jack Chain could be used. Due to the weight of these items they are unsuitable to be hung via easy rolls.

For cuttings, seedlings and young plants, we recommend a hanging height of 1 metre above the canopy.

For larger, well-established vegging plants we recommend a hanging height of 80cm above the canopy.

For plants in the flowering stage we recommend a hanging height of 60cm above the canopy.